This is too cool not to share.  The reason I made it down to New York City instead of heading straight for the west coast is the event of having the Bride of Rock aka Janice competing in the national Air Guitar Championships. 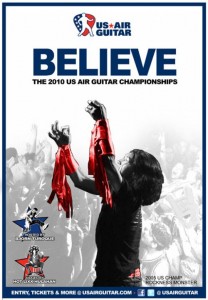 .  It’s simply Believe, think about it a moment…  To top it off Fatima is featured in one of the posters and I believe he was also plastered to the side of a bus at some point.  You can’t tell me that after looking at that image you don’t believe he isn’t a rock star.

On to the Bride.  She took the Los Angeles regional with a stunning performance which Alastair simply summed up with “Blimey, wasn’t expecting that bit at the end!”

At the nationals I got recruited to help her to the stage, she stood on a chair while a couple of us lifted the chair to the stage.  She rocked out to Bulls on Parade and did a great performance.  Unfortunately the judges were pretty cynical and she came in 9th place out of 18 (I think she missed round 2 by just a fraction of a point.)  The plan for round 2, had she made it, would have been pretty amazing as well as it included magic tricks and doppelgangers.

In the end Romeo Dance Cheetah took the night, even though I thought Dreamcatcher was the clear winner.

New York City was crazy as is anything having to do with Fatima and Janice, the food and the people were great.  My first night there I stayed at a hostel near Bed Stuy, a somewhat notorious area which turned out to be perfectly fine.  I do have to thank my NYC hosts for putting me up as well, Dan and Liza were perfectly gracious about letting us take over the apartment.  Now, it’s time to ride.