I sit and stare at the crystal blue water and think I’ve failed to find any of the true Thailand.  I’ve seen temples and historical places and met a few people here and there, but I have the nagging suspicion I took the easy way out most of the time and haven’t experienced the true Thailand.  After being here a little over a month now I feel I know little more than I did before I got here with regard to Thai culture.  I’m not sure exactly how to remedy this for the remainder of South East Asia but it’s something to ponder on for the next few weeks.

At the same time It’s hard not to become more cynical towards a lot of the interactions here because of the tout culture.  I’ve come to realize that any information that comes to me unasked for is a lie and to believe the complete opposite of whats told to me.  A good example of this is at the Cambodian border where I was told countless times that if I left the border that day I wouldn’t be able to return the same day, of course this was completely unfounded and was able to return with no problems.  I realize they are just doing their job but from my perspective it gets very tiring to be on guard 24/7.  I keep reminding myself to have faith in humanity and that they are just doing a job, but it’s hard to remember that after being lied to for the millionth time.

I spent a few days on Koh Phi Phi island, famous for several reasons.  One was that it was devastated by a tsunami shortly after Christmas in 2004.  Any signs of the tsunami are far removed from what I can gather. The guidebooks say that rebuilding has been done to survive another tsunami but I find that hard to see as most of the structures look to be built with the same half-hazard construction I’m used to seeing.  The other reason is it’s where the film “The Ocean” was set, something I neglected to watch or read before getting here.  We went around on a longtail one day to see all the “pristine, deserted” beaches.  I wouldn’t go so far as to call them deserted as each one was flooded with longtails disgorging their passengers but they do manage to keep the beaches clean which made for some stunning beaches.  Pictures can’t do the blues justice, it’s a shifting kaleidoscope of blues.  It was fun to sit on the veranda and just look out into infinite blue.

Another long bus ride and I’m back in Bangkok figuring out what happens next. 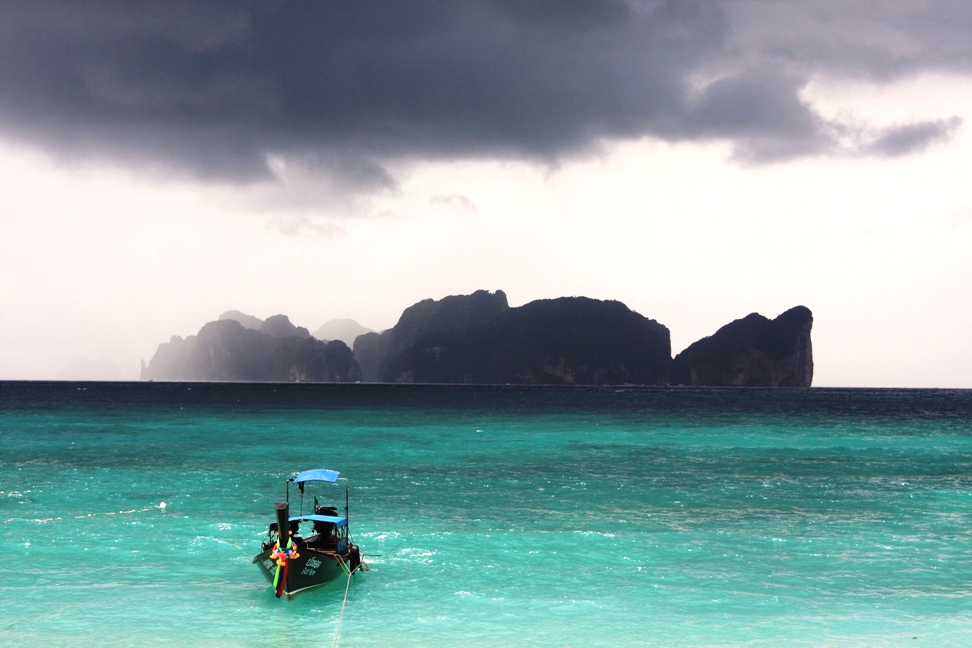